So my car knitting shawl/scarf thingy is coming along nicely, 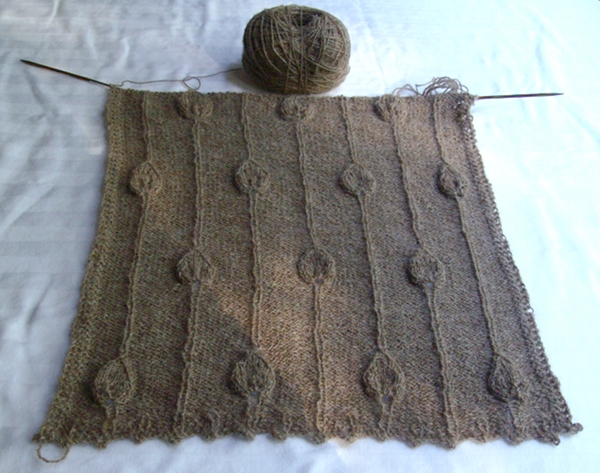 and I was thinking about how useful the embossed leaf motif is. It’s easy: a series of increases at the bottom, some straight rows if you wish, and a series of decreases at the top. It’s adaptable: you can change the appearance, shape, and size by changing the type and placement of your increases and decreases. It’s self-contained: an embossed leaf grows and shrinks independently of the rest of the piece, so that you can keep doing whatever you were doing for the rest of the stitches, and at the end of each leaf you’re back to the same stitch count you had at the beginning. If you prefer your leaf to be flat, rather than raised, you can use corresponding decreases and increases outside the edge of leaf, keeping the overall stitch count constant.

Here’s how I came up with the leaf in the car knitting shawl. I tried two kinds of increases to for the base: kfbf (knit in the front, back, and then front again of the same stitch), and k1, yo, k1 (knit one, yarn over, knit one in the same stitch).

There are a few other ways to do this, including making the increases on either side of a centre stitch (e.g., yo, k1, yo) or by doing more increases at the beginning (e.g., k1, yo, k1, yo, k1 into one stitch), but since I knew I wanted the leaf base to come to a bit of a point and not bell out too much, I tried out the first two.

After you’ve got a starting row, you simply increase every other row until you have the width you want. The most common way to do this is to do a yarn over on each side of the centre stitch as in the leaves above, which gives an open, delicate effect with a defined centre vein, though you can also get a nice look using k1, yo, k1 increases on the centre stitch.

You can space these increases out a bit more than every other row if you want a long, tapered leaf. I did my increases every right side row, so every other row of knitting. Because I liked the look of the p9, k1 ribbing and the proportions of the pattern when the leaves were the same width as the space between the knit columns, I increased until I had 9 stitches in the leaf.

Then you can either start decreasing right away (on the next RS row) or keep going straight for a few rows. I did three rows straight (two WS, one RS) to give a gentle curve to the sides while still having a fairly plump-looking leaf. To outline the tip of the leaf, you can use a SSK decrease on the right side and a k2tog decrease on the left side, so that the top stitches of the decreases make a line right to the tip. To make a less defined tip, where the knit stitches just go straight to the edge, swap the decreases. As with the rest of the leaf, you can space out the decreases for a more tapered look; I decreased every other row until there were three stitches left in the leaf.

The last decision is whether you want the tip to lean left, right, or not lean at all. For a left-leaning tip, as in the leaf above on the left, slip the first two stitches knitwise one at a time, as if to do a SSK decrease, knit the next stitch, and then pass the two slipped stitches over the first (s2kp). For a right-leaning tip,  SSK, pass that stitch back to the left needle purlwise, slip the next stitch over, then pass the stitch back to the right needle. (You can also just k3tog, but it doesn’t really look the same. See the leaf on the left in the first demonstration swatch for an example of the SSK-psso decrease.) For a centred double decrease in which the centre stitch ends up on top, as in the leaf above on the right, slip the first two stitches together knitwise, knit the third stitch, and then pass the two slipped stitches over. Because I was feeling fussy, I’m doing left-leaning double decreases on the right-side leaves, right-leaning double decreases on the left-side leaves, and centred double decreases on the centre leaves. The only person who will ever notice this is me, but if it’s not symmetrical, I’ll know, and it will bother me until the end of time.

Here’s how the leaf in my shawl works:

or, in written form:

Et voilà. Go forth, knit, and should you feel so inclined, stick a leaf on it.

3 thoughts on “Tutorial: Stick a leaf on it”