The next round of samples is almost done, and I’m ready for a break. Between indie releases and commissions, I’ve been going pretty much non-stop since July, so I’ve promised myself at least two weeks away from sample knitting when these are out the door.

Once these are off, I’ll need to spend a day or so digging the apartment out from under the mess that accumulates during a big work bender. After that, though, ohhhhh, yes. I’ve got more plans than could reasonably be accomplished: set up my workspace, finally; finish himself’s sweater, which has been a sleeve and a button band/collar away from done since April; get started on at least one of the sweaters I’ve been sketching and swatching for myself; finish my Circular Reasoning cowl before another winter’s come and gone; play Fallout 4 until my eyes bleed…it’s a very long list, and I won’t get to all of it, and I’m okay with that. The thing I’m most looking forward to, though (apart from exploring the post-nuclear wasteland), is getting re-acquainted with my spinning wheel.

Poor Mustang Sally has sat neglected in the back room for far too long, and I’m dying to plunge into Jillian Moreno’s new book, Yarnitecture, and apply what I learn from it at the wheel. In anticipation, I’m also looking at patterns for all the new yarn I’ll spin. With Spinzilla starting today, I know I’m not the only one with spinning on the brain. I’ve bookmarked quite a few patterns that I think would look great in handspun yarn; here are the ones at the top of my list:

This right here is a perfect design for handspun yarn: exact gauge not essential, a stitch pattern that works well in variegated colourways, knit until you run out of yarn. I like Curiosity’s unusual shape, and it looks like a good, portable, fairly mindless knit, for when I’m hanging out with friends and really not feeling the sock thing.

For smaller amounts of handspun, hats are always a good bet. Woolly Wormhead’s Painted Woolly Toppers and her new Painted Woolly Toppers for Kids have loads of neat hat designs that are designed to show off variegated yarns, so they’ll translate well to multicoloured handspun yarns. Each book has designs for a variety of yarn weights, so no matter how the yarn came out, there’s probably a hat for it. My current favourites are Helical* and Quoin from the first book, and (since giftmas is coming) I’ve also got my eye on Mobberley from the second book. 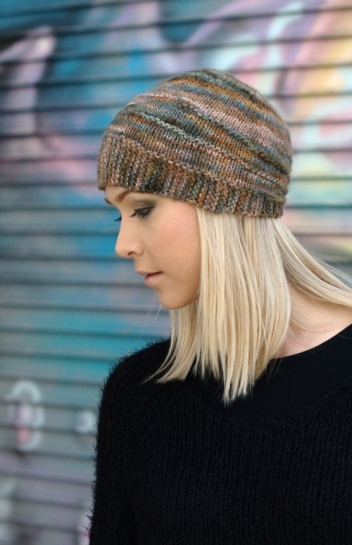 I love how each hat uses construction and texture to work with the variegation and show it to its best advantage. Woolly’s hats are always interesting to make, too, so I know I’ll learn something from each one.

I’m always looking for cool handspun patterns; if you have a favourite, I’d love to hear about it.

Just a couple more days to go, Mustang Sally. I’ll be hanging out with you soon.

* I converted Helical into a cowl last giftmas, which also worked quite well.

One thought on “Handspun inspiration”