Oh, look! It’s November. Or, as many knitters know it, the frantic season. Now, in the name of sanity and continuing familial affection I have pretty much stopped with the seasonal gift knitting, and am much happier for it. I do make exceptions for the niece and nephews, though, because they’re little, and fun to knit for, and did I mention the littleness? I’m also going to make an exception for myself, since all my knitting time lately has been devoted to work stuff and a cardigan for himself (which is sort of also work stuff), and I’m feeling very virtuous. And cold. And in need of a sweater.

I do, however, need help keeping on track. (Long time readers may remember that when it comes to non-work knitting, I excel at starting projects, not so much with the finishing.) Fortunately, there’s a group for that on Ravelry: the Indie Design Gift-A-Long. From now until the end of the year, the Gift-A-Long group has stitch-alongs for every kind of project in knitting and crochet, with a huge number of prizes (over 1,800, from patterns to needle sets) to keep us motivated. There’s also a giant pattern sale, with 3,822(!) patterns at 25% off until the 21st, using the code giftalong2014. Eighteen of those sale patterns are mine; you can see which ones in my handy Gift-A-Long bundle, and all of the sale patterns on the Giant Pinterest Boards of Shopping Doom.

I’ve been poring over those boards and making plans, and here’s what I’ve come up with so far. (All photos used with permission, copyright the designer unless otherwise noted.)

For me: Cercis, by Marnie MacLean.

I really like Marnie’s designs (she’s also one of the brains behind the rather fabulous online magazine Twist Collective), and I’ve been wanting to make this sweater since it came out. I love the way the orderly rib turns into wild, branching cables, leaving larger areas of stockinette to shape the sweater over the bust. The motif carries over to the back, where the branches provide interest while maintaining the shape of the back.

Cercis is knit at worsted gauge, so with luck, it should go pretty quickly.

For the niece: Orbital Ornaments by Laura Chau.

The original plan for Her Nieceness was a monster, but as soon as I saw these ornaments, that plan went out the window. As I mentioned last year, Little G loves space things, which is something I’m happy to encourage. Plus, the pattern calls for small amounts of fingering-weight yarn, which means epic scrap consumption, and they’re small, so I should have them done in no time, right? (You can keep your laughter to yourselves, Chuckles. Don’t think I can’t hear you.) As a bonus, she’s a fellow Torontonian. I haven’t lived there for a long time, but it’s it’s still my hometown, and I’m happy to support a talented Canuck.

For me: Interlochen by Carol Sunday. I’m feeling a yen for cables and comfort and warmth, and Interlochen has all of those things. 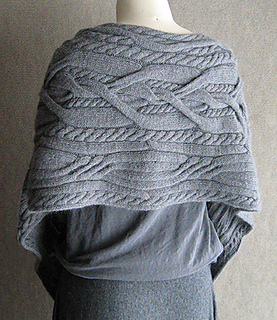 Then Carol’s done a clever thing at the front to keep the wrap wrapped, either as a shawl

or as a really luxurious scarf.

I’ve worked with the recommended yarn (also by Carol Sunday), so I know exactly how soft and wonderful Interlochen would feel wrapped around me. I may not get to this by the end of the year, but I’ll probably snag the pattern while it’s on sale.

For the smallest nephew: Sheepish Toy by cheezombie.

This one really needs no explanation. I mean, it’s a sheep! With giant eyeballs! What more could you want?!? My only difficulty is in deciding whether to make this one or her fabulously demented-looking Garden Slug. 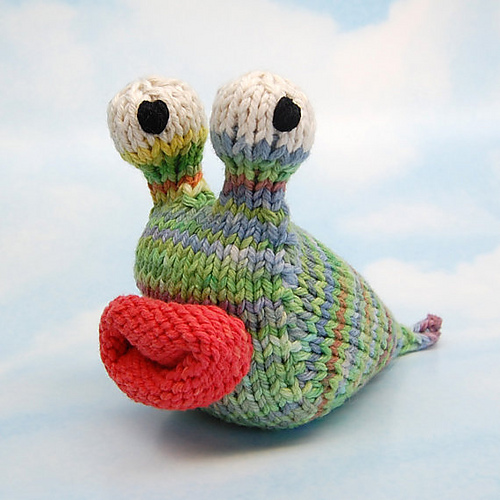 I may have to do both. (There are so many others, too, even a space alien. You really owe it to yourself to check out the cheezombie designer page.)

Well, that’s enough to be getting on with, no? Tomorrow: more me, the other nephew, and a backup plan or two. Because we’ve got all the time in the world.