…is the approach I went with for the next Christmas project, which is why there are two hats in this post. Always ask the parents, people. It’ll save you grief in the end.

A while back, a dear friend sent me some merino sliver, all the way from New Zealand, which spun up into a pretty, soft, red and pink yarn: 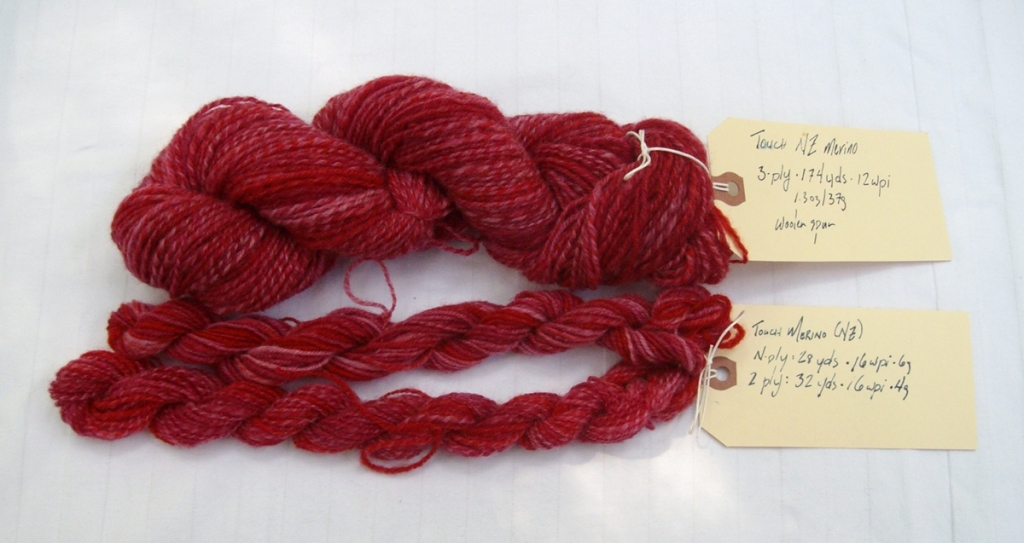 Now, I may not be a big fan of pink, but The Ever-Growing Niece loves it. Loooooooves it. Pink, pink, pink, the brighter the better. I knew who this yarn was going to. It was a pretty fine yarn (roughly light sport weight), so I mixed it with some stash yarn (Sunday Knits Nirvana 3-ply in Cream), looked up some standard measurements, and made her a hat. Swatching? Who has time to swatch? It’s a hat, therefore it is its own swatch. Right?

As I worked, I kept thinking, “This hat is awfully small. It seems so small. I have no child here for comparison, but surely this is too small.” Finally, I couldn’t stand it. I emailed my sister. “I’ve made this hat for the niece. It’s 16″ around, stretching to about 18″. That’s supposed to be fine for her age, but it looks too small. How big is her head?” The reply came back: “Through her father, she comes from a line of big-headed people. 20.5″ around.” Crap. Then, “Also, she’s very sensitive to wool, so she’s better off avoiding it.” Double crap. “Maybe it’ll fit Galactus, though? He can wear pink. He doesn’t care.” Saved! But still one hat short of a Christmas, and no appropriate yarn for a wool-sensitive girl.

It turns out that as much as she loves pink (and, it turns out, bright purple), The Niece also loves space, and though we may be in a brave new century, it’s still next to impossible to find pink and purple space-themed clothing. Space, it seems, is still for boys. It’s like the last  hundred years never happened out there in girl’s clothing-land. “Well screw that noise,” I thought, “My niece shall have her pink and purple space hat, or I’ll hang up my needles.” The yarn gods approved, apparently, because right about then, Bijou Basin Ranch put their Lhasa Wilderness yak/bamboo blend on sale, and it came in screaming pink and oh-my-gawd purple. I was running out of time, so I just did a space-themed band on a stripey beret (rather than all-space all over), but it turned out okay, I think. Given more time, I’d have tweaked the colourwork, but she likes it, and it’s soft enough, and that’s what’s important.

Of course, she’ll need to get it off her mum first. I know what my next project for the sister will be. I even know what size to make.